As a mother of all boys, I face some challenges. Without any other females in the house besides their mother, boys tend to get rambunctious. My girlfriends, that have girls, endure much less jokes about bodily functions and general horseplay. They have their own challenges, of course, but I really feel it is beneficial for boys to have a sister. It gives them an in-house peer that they can relate to and learn how girls may have different boundaries.

But my boys don’t have a sister. This is why it is of the utmost importance to talk to boys about inappropriate behavior. I always talk to my boys about what it means to be a gentleman, and to have respect for yourself.

Some may feel that curse words are better to never touch the ears of their little ones, but I feel it is a part of our language and the best defense is a good offense. When I first spoke to my oldest about swearing, he had definitely heard some swear words. Whether it was on TV or a family member, it is important for older children to understand curse words and how and why they are used in our society. Why? Because without understanding, you risk your child saying words that they don’t understand are offensive, because they are hearing them used by their peers.

For example, one mistake I made myself when I was young was the use of the word ballsy. People may feel that the words ballsy isn’t offensive, but people shouldn’t make references to genitalia in polite company. I heard the word at school, in reference to someone being daring and outlandish. Imagine my mother’s surprise when I used the word that night at dinner! I just didn’t know what I was saying.

Sometimes kids are afraid to ask their friends what something means, they don’t want to seem dumb in front of them. So, they aren’t trying to be inappropriate, but ignorance can’t be an excuse for inappropriate behavior. Of course, you should also lead by example and not curse around your children.

So, you’ve taken all these precautions, talked to your kids about what is expected of them and what behavior is appropriate, and you think you’re good, right?

You also have to talk to your kids about other types of inappropriate comments. Comments about others, even if they think they are being complimentary (“You’re so skinny!”) can get your child in trouble quickly. And this is almost more difficult to manage because pre-teens and teenagers always are jumping on the next witty fad, calling each other names and spouting off internet memes left and right. When you talk to them about it, they say “It’s not a big deal.” and “My friends think it’s funny, it doesn’t offend them.” And that’s what happened to me.

I got a call from my 7th grader’s school yesterday. It was the counselor and she had the daunting task of telling me that my baby boy made a girl feel uncomfortable. It’s not a call you ever want to receive.

I felt so awful, and wanted to make sure that the student was ok. For myself, I recall things being said to me at the same age that just made me wish I would be invisible. It shaped so much of my future, just not wanting to be noticed, especially by the opposite sex, because the embarrassment was unbearable. To think that my son had made someone feel that way is heartbreaking.

The counselor let me know that pre-teen boys are notorious for pushing the boundaries and venturing into the inappropriate range of behaviors. I was glad that she tried to reassure me that my son isn’t a deviant, but the important message was that it cannot happen again, or there will be serious consequences.

She told me that my son passed a note to the girl, in class, that said “I know you’re naked under those clothes.” My son denied doing this, but the message sounded all too familiar. I recalled back in the summer hearing my son and his friend laughing at such a joke. A quick Google search reveals this is an internet meme: 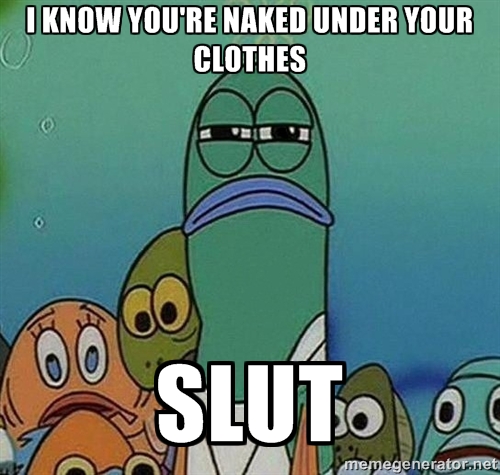 Although the alleged note didn’t say slut on it, if this is well known amongst the kids these days, it seems it would be implied.

I imagined when I got home I would find a cow-eyed child afraid of the trouble he was in. Instead, I found him merrily doing his chores without a care in the world. I asked him how school was, and he said it was fine.

Talking to the counselor hadn’t even registered with him.

I let him know that the counselor had called me, and he replied that the school was over-reacting. HUGE RED FLAG! It was time for a serious talk.

It wasn’t clear to him that it was the student that complained, and he had assumed that the behavior was witnessed by a teacher or staff member and reported. He further explained that he and his friend tickle and poke each other and it was no big deal.

I never condone a “They’re over-reacting” response. If someone finds it serious enough to pull you out of class and into their office to speak to you, you should listen up!

When I explained that it was a student that was in certain classes with him that reported it, he quickly realized that the person the counselor was talking about was not in his close circle of friends and/or in on the joke, as he had originally thought.

I felt the need to explain to him that even his friends may not be the best at letting him know when he is annoying them. At this age, kids may just giggle and put up with bad behavior by their peers because they don’t want to be a stick in the mud or they are shy, and that he, as a shy person, should understand how uncomfortable it can be to confront someone that is bothering you.

It was a perfect time to remind him that he is at school to learn, not to joke and play around with his friends. He should behave appropriately, keep his hands to himself and leave the jokes for after school.

I got back in touch with the school today, to let them know I had spoke to my 7th grader. The counselor seemed really surprised that I had put in the effort to follow up with my child. That is a sad commentary on the state of parenting these days, but I’ll save that for another post.

People may feel they need to side with their kid, when dealing with people in the community, like schools and other parents. But ignorance will not shield your children from the consequences and neither should you. You should be on the side of knowledge and let your child understand what is and is not accepted in our society, and you should be specific. Never assume they know what you mean. It has been my experience that children understand way less that they would admit.