Last week, I happened upon some great ideas for food crafts. With hope in my heart, I went to the store, bought the ingredients required, and set off to have a fun weekend with the kids. These ideas are by Robert Mahar , presented by Julianna Strickland. I loved the ideas immediately, but would the kids enjoy making them as well?

I set up at the kitchen table, made a one of each and called the boys into the room. Did anyone want to try or make things with me? The baby was, of course, very interested. All the items on the table just had him ready to create, or at least grab things and push them into his mouth. Then I looked at the faces of my 12 and 10 year-olds. Slightly more reserved than the baby’s reaction, they actually sat down at the table. Now, I just had to reel them in. I started with chocolate, because that is very hard to turn down. I pushed a plate of witch hat cookies towards them. Easy and fun to make, we just used some orange icing on the center of a Keebler’s Fudge Stripe cookies and pushed a Hershey’s Kiss onto the icing to make the point of the hat.

Then, I hit them with the skeletons; a brownie base, with a pretzel spine, ribs and a marshmallow head. More fun to look at, but much more difficult to actually eat. The kids seemed to prefer making them to actually eating them. I have seen a few variations of this one, using a cupcake instead of a brownie, or leaving out the pretzels. If we were having a Halloween party this year, these would make fun centerpieces.

We had a failed attempt at making witches brooms, like the ones shown here. The cheese crumbled too easily, and the chives snapped apart when I tried to tie them. The apple peanut butter marshmallow teeth fell apart when the kids tried to put them into their mouths. Although they said they tasted yummy, I could tell they were disappointed that they couldn’t walk around and use them as false teeth.

I finished off our food fun with jack-o-lantern stuffed peppers, which I had been roasting in the oven while we were having our fun. My planning on this wasn’t best, since the kids were now filled with sweets and weren’t in the mood for something a little more substantial. Oops! 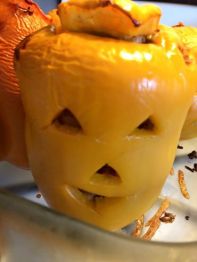 I learned a few things – primarily, that you should have lunch first. But also, I had selected too many projects to do, which resulted in a long shopping list. Although, it is important to pick more than one project, because if it fails, you can quickly move on to the next fun project. You don’t want your kids shuffling back to their rooms disappointed with your craft fail. The reward for all this effort? An extremely messy kitchen, and the gratitude from my children. Yes, actually grateful that I took the time to do something with them. They said it was fun, and they enjoyed it.

I felt the meter move closer to supermom.

5 thoughts on “Play with Your Food”